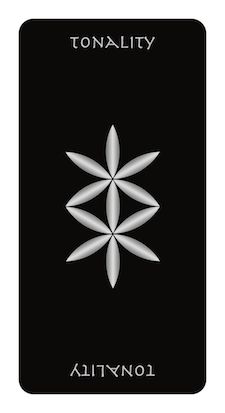 In music, tonality is the phenomenon in which a group of pitches appears to gravitate around, to reference, a single pitch. This single pitch and its posse are sometimes called a key—the “key of C” is a tonality, for example, in which a group of specific pitches, expressed via harmony or melody or scale, is centered around the note “C.”

The phenomenon of tonality arises from the Harmonic Series. When the relationship between a single pitch and one or more pitches is analogous to the relationship between a fundamental and its lower harmonics, we perceive that single pitch as do, as home. Tonality, then, arises from natural law—that’s probably why we find it so pleasing, and why we find atonality unsettling (no judgment there—sometimes unsettling, or at least a different kind of settling, is just the ticket.)

Tonality is an Elemental card, and references a central point, a gravitational center toward which things are drawn and around which they orbit. It is a vibratory rate, and its harmonics are fixed to it, and like rates and their harmonics will resonate with it: thus it defines the shape things can take and the support that will be drawn. It asks us to consider what is central, what is do: is it clear and well defined? Does it reflect what we want or what’s needed? Are there other tonalities, other issues, in play as well, and if so, are they harmonious together, or at odds? Tonality is closely related to intention, but while intent sets things in motion, Tonality is a state: it asks us to see what’s at center, and what’s being drawn to it. Or who’s at center—Tonality can also reference a person at the center of things.

Although tonalities speak of the “is-ness” of things, they are not in fact static; they are always on the way to and from higher and lower tonalities (this is explored in depth in the pages under Mechanics to Metaphor.) In Muzoracle mythopoetics, shifts in tonality reference shifts in state. In a casting, this may be worth considering: how permanent is this center of gravity? Where did it come from? Where might it go? 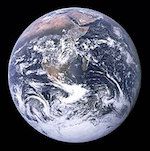 What constitutes a center of gravity? When we look at the Earth, for example, we see less something singular than an integrated system. When considering Tonality in terms of work on ourselves, we are called to see more than a single aspect of ourselves that we wish to be central; we are asked instead to find a center that includes all the deepest wishes of our being. Ultimately, the center of gravity is the Self. The more self-realized we are, the more unstuck in the pools and eddies of identification, the stronger our gravitational pull, and the more things we draw and are drawn to that are in line with who we deeply wish to be. In musical terms, the more well defined a fundamental, the clearer its harmonics, the more powerful its resonances.