The Telluspheric Tuning Matrix—TTM—is a tuning system based on the workings of the Harmonic Engine as it plays out in the Earth’s atmosphere. The note “C,” the system’s primary do, is set at 7.83 Hz, the average fundamental frequency of the Schumann Resonances. The TTM is a floating “do-centric” twelve-tone system: the ratios between frequencies stay the same regardless of key, but the frequencies of individual notes change from key to key, as the do from which they arise changes.

The twelve tones in any given key derive from its two ternions, its primary and its antipodal. Primary ternions are built from interlaced Source, Present, and Potential Harmonic Series, as detailed on the Harmonic Engine page. It is from the Primary ternion that the diatonic notes of the key’s scale—do, ti, la, so, fa, mi, re—are derived. Antipodal ternions are also built from interlaced Source, Present, and Potential Harmonic Series, but their do is in a 5:7 relationship with that of the Primary. It is from the Antipodal ternion that the chromatic notes of a key’s scale are derived: ra, me, se, le, and te. (Although Antipodal ternions generate a fa and ti as well, it is the fa and ti of the Primary ternion that are used.)

The Telluspheric Tuning Matrix is always referencing a do. In a Muzoracle casting, that do is determined by the Musician’s Die, and remains do throughout the casting. When the tuning is used compositionally, however, the do may be changed at will—from section to section, or even from note to note. The do’s themselves, however, in any case, are always derived from the Primary and Antipodal ternions in C. If do is F, F is at 167.04 Hz or one of its octaves; if do is Ab or G#, its at 394.632 Hz or one of its octaves. Thus the frequencies within the tuning are always tied to the Schumann Resonances, and the life that thrives within them.

The two tables just below show the Primary and Antipodal Ternions in C; the other eleven keys are constructed using the same formulae, setting the frequencies of their do’s according to the ternions in C. Below those tables are tables of the ratios that sound as the sonic archetypes—dyads and triads—occur above or below scalepoints. 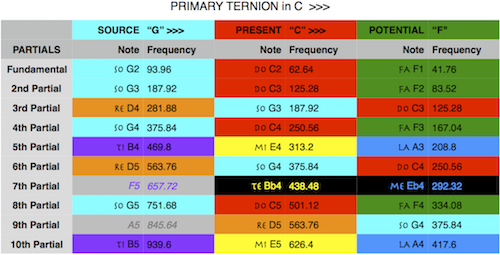 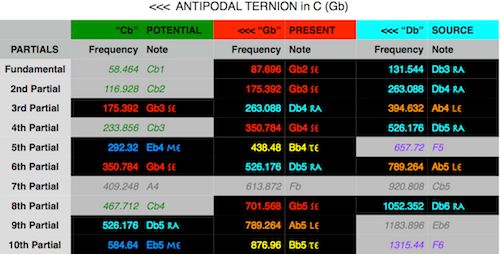 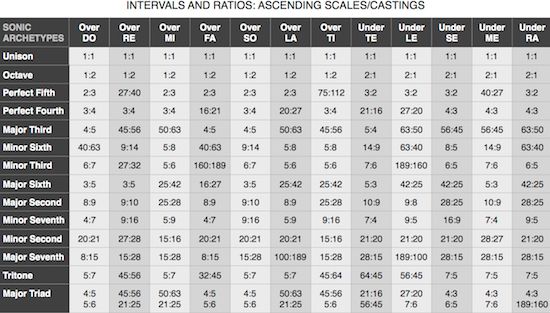 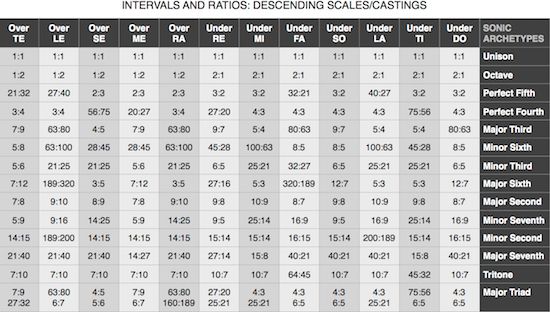