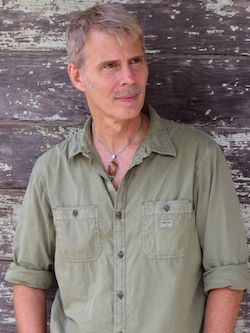 J S Kingfisher – Jeff – is a songwriter and recording artist, arranger and producer, composer for film and orchestra, instrumentalist, and vocalist. He is the composer, arranger, and producer of From the Moon to the Earth, a 21-piece song cycle and 2-disc set featuring 26 of LA's top vocalists and session players (2016); Vesica Piscis (1998); and Floating Upstream (1993.) In addition to the Muzoracle, Jeff is also the creator of Muzundrum, a musician's game of chance and skill, and the Musician's Dice, a composing, improvising, and educational tool.

Jeff’s work covers a broad range of styles, and his new material is often released as singles in open ended projects: an ambient collection called “Las Californias” is underway, and under the moniker The Unnamed, a collection of high camp and misdemeanors. He releases one piece from one or another of these projects every full moon or so. Jeff is also finishing production on Serbian singer Dalibor Banović's new album, and plays keys and cowrites with the eclectic pop rock project Alphanaut.

In addition to his music production work, Jeff works as a music practitioner, offering Muzoracle castings and swenakilo, a sound immersion experience integrated with the Muzoracle, at his Coachella Valley studio (he also offers Muzoracle castings over Messenger and Skype.) He lives nearby with his family and dogs.

Kingfisher's From the Moon to the Earth is conceptually related to the Muzoracle. In it, the said journey is one of "descending into presence." Below is Tellurian Passage, the centerpiece of the song cycle.