While the Initiating Force makes itself known within many of the dyads, it is within the Tritone that it is most purely expressed: Tritones are pure fire, pure Yang. They are the fuel in the Harmonic Engine, propelling us from one key to another, interlacing ascending and descending scales and bringing the scalepoints to life. 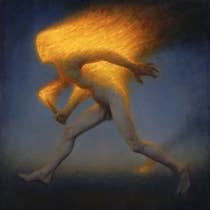 In the Middle Ages of Europe, the Tritone was considered evil: it was the diabolus in musica, the “devil in music,” and was forbidden. This, of course, only testifies to its power and mystery. Tritones are both profoundly dissonant and leading; they cannot sit still, nor will they allow us to. In a casting, they represent impetus: they set things in motion. If not consciously navigated, the Tritone can kick us into somewhere we’re not quite ready to be; oft times it’ll kick us there in any case.

In the active suit of Brass, the hermeneutic for the Tritone is compulsion; in the emotional suit of Strings, change of heart; in the intellectual suit of Woodwinds, thoughts provoked; in the physical suit of Percussion, transformation; and in the spiritual, holistic suit of Voices, evolution.