Mechanics to Metaphor: The Harmonic Engine

The Harmonic Engine. Both Muzoracle mythopoetics and the mechanics of Muzoracle castings arise from and depend on the interplay of two modes of experience: being (above the Rhythm Line ) and process (below it.) Each of those modes is continually being generated by the other: being gives rise to process, and process gives rise to being. Mythopoetically, the impetus for this continual becoming begins in the Harmonic Engine.

A good visual reference for the workings of the Harmonic Engine is the piano keyboard (though it’s not entirely accurate sound-wise given the way pianos are usually tuned—more on that below.) We’ll use the piano keyboard and the key of “C” for demonstration purposes in this chapter.

Above are the first seven partials of the Harmonic Series shown on a keyboard in the key of C. If we “reduce” those notes to a single octave—if we take all the frequencies from the series and double or halve them until they fit between two consecutive Cs — we wind up with the following:

As we can see, the first six partials are part of a diatonic scale: they are all either do’s, so’s, or mi. Do, so, and mi sounded together make something lovely: a Major Triad or chord, in this case a C major chord, do-mi-so, C-E-G. This is very sonorous to us, and for good reason: the notes that comprise the chord are close in ratio to its fundamental, close to do. These three notes, derived from these first six partials, together are at rest, and we are at rest within them.

The appearance of the seventh partial, however, of te, throws a bit of a wrench in the works. It marks the arising of dissonance, especially between itself and the fifth partial—mi— below it. This dissonance, called a tritone,  wants to resolve—we want to resolve it. Or perhaps we don’t—in any case, the possibility of resolution presents itself. Wanting, desire, resolution, possibilities… what, along with the seventh partial, has come into play here? What does this dissatisfaction, this possibility of resolve, require and involve that was not, for us experientially, present before the seventh partial arose?

Time. In Muzoracle mythopoetics, the arising of the seventh partial marks the birth of time.

So: the seventh partial has risen. We were being, now we’re doing; we were at rest, now we move. But where do we go?

The dissonance of the Tritone, its hunger to resolve, has a particular character: the fifth partial aches to rise, and the seventh to fall—and by precisely the same amount, in fact. By adding one third of our fundamental frequency to the fifth partial and subtracting that same third from the seventh partial, we find the resolution we seek—and much else as well.

The fifth partial, mi, rises to become fa, and the seventh partial, te, falls to become la. Fa, however, is not just the fourth step of do-re-mi-fa-so-la-ti in C; it is also do of a new key: F.  And la is not only the sixth step of a C scale; it becomes mi of that new do. 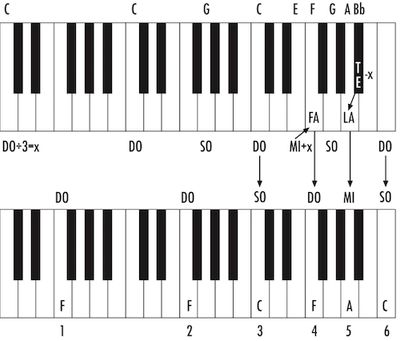 Musically speaking, we’ve just seen and heard the movement of a dominant seventh to a tonic (if you don’t know what that means, you’ll recognize it in a second when you hear it.) That movement is a driving force in much—all, arguably— of the world’s music, either by its inclusion or in its avoidance or lack.

Mythopoetically, we’ve witnessed a dissonance arising in the present and spawning a future.

In the language of the Muzoracle, what’s emerging here is a ternion: three interlocked harmonic series a fifth apart, with the center one flushed out into a diatonic scale. Mythopoetically, they speak of where we’ve been, where we are, and where we’re going; they are Source, Present, and Potential Series, respectively. 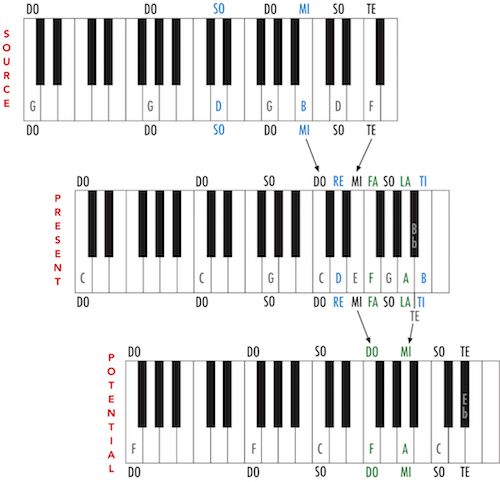 The scales engendered by the Harmonic Engine are descending ones: do-ti-la-so-fa-mi-re. Time is born within being, and moving downward through frequency eventually falls below the Rhythm Line, becoming our experience of process. Process gives birth to that which is; and from that which is arises process again. Spurring into movement, falling into being: the Harmonic Engine provides us a glimpse into this, and motors the Muzoracle mythopoetics down the road.

A word about tuning. One might think that, via the Harmonic Engine, we could start with one harmonic series and extrapolate the next, then the next, then the next, creating a cascade of keycenters, one after the other. C would lead to F, which would lead to B-flat, which would lead to E-flat and so on, until we circled back around and had all twelve keys (musicians will recognize here the Circle of Fifths; it’s how we all learn sharps and flats and keycenters.) And that does happen with our equation, but we don’t stay in tune for long. A ternion will stay in tune with itself, but go beyond its confines—to the source of a source, for example, or the potential of a potential—and the scales near the outer rim go further and further out of whack; and we end up not with a Circle of Fifths, but a spiral.

And that’s all well and good, unless we want to make music every which way that moves freely through all twelve keys and still sounds in tune—which, of course, we often do. And how do we do it? Well, we play out of tune—but make sure we’re just a little out of tune, and equally so (and hope no one notices.) Seriously—it’s called equal temperament: we tune our octaves perfectly—1:2, 2:4, 4:8, etc.—and just divide everything in between the octaves evenly by 12. This allows for the more-or-less-in-tune chromaticism we know and love, and it’s symmetrical, and we’re used to it, and our Circle of Fifths stays a circle; but it is not congruent with the organic harmonies that arise in Nature. The Perfect Fifths are not perfect, the Major Thirds, majorly not. Equal temperament has wonderful advantages in many applications, but it is close-but-not-close-enough for many involved in music healing, for example; nor for those who can discern, and/or care about, or at least want to have the option of experiencing,  low ratio, deeply consonant intervals; nor for those who want to make use of all sorts of intervals, consonant and otherwise.

The temperament used in the Muzoracle—on muzoracle.com and by its creator in the Muzoracle studio—is the Telluspheric Tuning Matrix  (TTM), a tuning system based on the workings of the Harmonic Engine as it plays out in the Earth’s atmosphere. There are many “pure,” as in low ratio, intervals within the matrix—and many that are noticeably whacked. In a casting, if you're using the TTM tuning, the consonance/dissonance of a given Harmony Card, for example, will vary quite a bit depending on the Solfège Die it lies above or under. But this is appropriate, as the card will also vary quite a bit in meaning.