Keycenters and Chakras:
The Musician's Die

Up and down and sharps and flats. Each of the chromatic notes on the Musician’s Die are spelled two different ways. C# (“C sharp”) and Db (“D flat”), for example, are both on the same face of the die. That’s because C# and Db are actually the same note, which can be arrived at by either going up from C or down from D. (To “sharp” a note means to raise it, to “flat” a note means to lower it.) If a casting’s ascending, we use the “sharp” spelling, as in “C# Ascending.” If a casting’s descending, we use the flat spelling, as in “Db Descending.” While the keycenter in both cases would sound the same, the Chakra Reference would be different: C# is on its way up from the Root to the Sacral Chakra, while Db is on its way down from the Sacral to the Root. 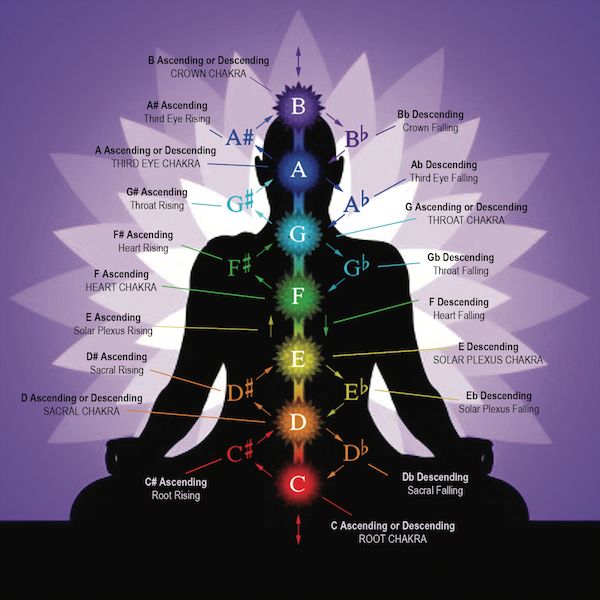 What You're Hearing. The sound samples on the following pages are recordings of specially tuned quartz crystal bowls. They are best experienced with headphones—watch your volume, though, they start soft and get quite a bit louder.

Further Study. The pitches of the bowls are lower than those used in standard tunings. The hows and whys of this, and an in-depth look at what chakras actually are, is explored under Mechanics to Metaphor, on the Pitch, Chakras, and a World "Do" page.

The relationship of pitches to one another in the Muzoracle is unique. If you've got Mechanics to Metaphor under your belt, and you want to really want to understand how it all works, take a deep breath and dive into the Telluspheric Tuning Matrix  (nerd alert.)