Completing a Casting. In a Full Layout, we continue rolling dice and drawing cards, adding more and more positions to the right, until we roll a scalepoint for a second time. When that happens, rather than forming a new position, the repeated die is placed adjacent to its mate, and another card is drawn and placed across the card already in that position, with its defining end left (see below.) That final, two-dice, two-card position then becomes the axis of the casting, and the casting is complete. If we never roll the same scalepoint twice, the casting is complete when we run out of dice (that doesn’t happen very often). 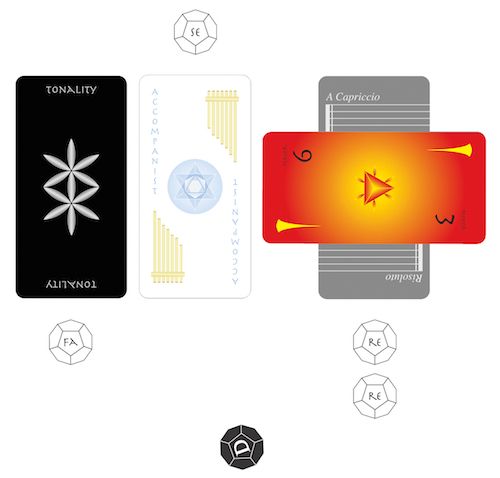 Above, a Full Layout in D Ascending. The fourth roll yielded “re” for a second time: thus it was put next to its mate and the final card of the casting was drawn (the Major Sixth of Brass.)

The One-up Casting. The method previously described is for the Full Layout Casting. The One-up method is just the same, but limits the casting to just one position: the Musician’s Die is rolled, then a Solfège Die, then a card is drawn and placed—and that’s it. We don’t keep rolling and drawing until a double is rolled.

Full Layouts can be very deep and complex, especially if they end up having a lot of positions. A One-up can be a real powerhouse, and can be just the ticket for a certain sort of inquiry—between the chakra reference, the scalepoint reference, and the card, there’s still plenty to work with. The simplicity of the One-up also makes it a good choice for beginners.

At right, a One-up in A Descending.