Using the Muzoracle with
Traditional Tarot

Although the Muzoracle is subtitled “The Tarot of Music,” the only things it really has in common with traditional Tarot are a) it has cards, divided into two basic sorts; and b) one of those sorts is in suits that correspond with the classical elements.

Besides the fact that it is unrelated to music, what perhaps distinguishes Tarot most from the Muzoracle is the nature of its meanings: meanings in Tarot tend to be vividly drawn, while the ones in the Muzoracle are more open-ended. In a Tarot spread, one might see an archetypal image in the past, another in the present, another in the near future, and another presented as an outcome. The archetypes are ancient, ingrained, powerful, weighty: the Fool, the Hermit, the Devil. The narrative that emerges can plug into our beliefs, our fears and hopes… there can be a sense of inevitability, of things unfolding beyond our control. These qualities lend the Tarot a predictive air, and in culture at large the Tarot is commonly associated with predicting the future, with fortune telling. Such power and weight imbues the Tarot with both potential and risks: in the hands of a master, it can prod and inform and lead to profound insight and creative responses; in the hands of the fearful, it can reinforce fears and bolster unquestioned beliefs, leading to an oppressive sense of doom or a pollyanna’s hope.

In contrast, the archetypes of the Muzoracle are abstract: they’re sounds, shapes, pick and choose keywords. The positions in a casting reference points in the processes of nature or intent, and are meant to trigger questioning: the Muzoracle asks more than it tells. Broadly, one might say that the Tarot is more concerned with defining, the Muzoracle with inspiring; that the Tarot leans toward helping us see, the Muzoracle, toward helping us create. But these generalizations are broad indeed—everyone's relationship with the Tarot is different, and everyone who uses it does so in their own way. The same can be said for the Muzoracle. And if the reader has psychic abilities, well... it's a whole different ballgame in either system.

In any case, the two systems can work well together. When a Tarot card is added to a Muzoracle position, details begin to flesh out—and the possibilities for interpretation begin to narrow. Not to nothing, however—a Muzoracle casting with Tarot still won’t go predictive on you. The best thing to do, if you’re interested, is simply try the two together. You may find the addition of Tarot spoils the broth; or you may find it salts it. Or you may, like the author, keep a deck around and occasionally bring it in, when the intuition says yes. 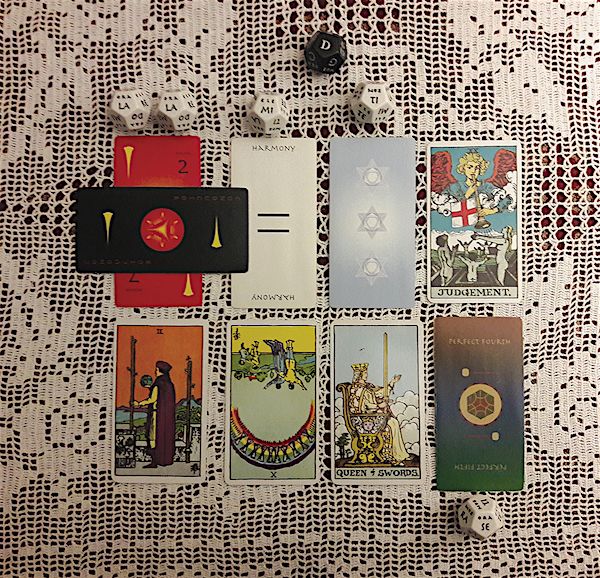 In a Muzoracle casting, Tarot cards don’t have upright and “reversed” meanings; the Tarot ascends or descends, just like everything else. Tarot cards that are drawn upright move in the direction of their position; cards that are drawn inverted, however, move in the direction opposite of their position, from the scalepoint a tritone away. In the example at right, positions 1, 3, and 4 simply include the Tarot: position 1 is a Major Second of Brass, a Conductor of Brass, and a Two of Wands under la; position 3 is a Triad of Woodwinds and a Queen of Swords under ti; position 4 is a Perfect Fourth of Percussion and Judgment over se. In position 2, however, while Harmony is under mi, the 10 of Cups is traveling upwards from the other direction, over te. (A good quick reference regarding what's the tritone of what is the "Kingfisher's Mirror," about 1/2 way down this page.)

All of this  makes for some interesting dynamics: the Tarot often moves counter to the Muzoracle cards. This, along with the inherently different nature of the Tarot, gives castings with Tarot a feel all their own. Give it a try!