The Mythopoetics of La and Me

Contained within our Universe are its children, the Galaxies. Life at this level, like all life, is ultimately an effect of Divine Will; at this level, though, it is once removed. Galactic life operates under the laws of our universe, which is not the Unfathomable but a manifestation of it: la is the level at which mechanical lawfulness first appears. Here, the singular becomes palpable and many, and between the many we see lawfulness at work: in gravity, in inertia, in the basic phenomena that govern life as we know it. Comparative knowledge arises; we have a sense of place. In our Ray of Creation, the scalepoint of la refers to one particular Galactic Being that is of great significance to us: our galaxy, the nurturing Via Lactea, our own Milky Way. 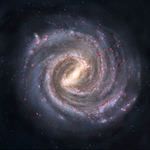 In a descending scale, la represents governance. Cards drawn below la—or its chromatic counterpart, me—occur at a time when rules are laid out, when structures are put in place, when constructs and paradigms are formed; they speak of governing principles or underlying causes.

In an ascending scale, la is the last point before transition, the point of acceptance. Cards drawn above either la or me occur at a time of accepting,  forgiving, or letting go.