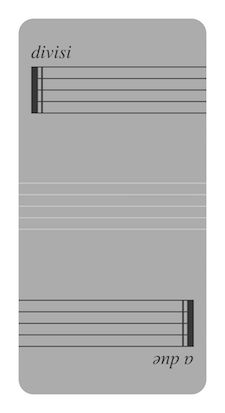 In a musical score, a divisi (dee-VEE-see) is a directive for a group of musicians playing together to split rank. If there are eight violins playing in unison, for example, the divisi directive might indicate that they split into two groups of four in order to play in harmony.

Divisi is a Directive card, directing the querent to split off from another or from a group, or to perhaps split a group, or divvy up resources or tasks; it can also refer to a time when such a dividing is at hand. Divisis are often temporary in nature, made with an eye toward eventual reconciliation; in music, a divisi is often followed by an a due , a coming together.