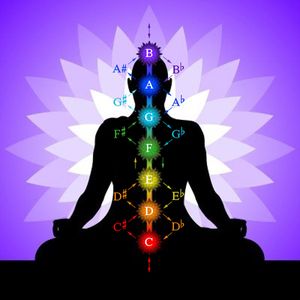 The second layer of metaphor determined by the Musician’s Die is a casting’s keycenter, determined by the pitch that lands face up when the die is rolled. In addition to defining the tonal center of the casting—its do—a casting’s keycenter also references a chakra, or movement between chakras. Chakras are energy vortices within the body associated with various aspects of being. The keycenter/chakra associations are rich in metaphor, and provide a connection between castings and the physical body. They mark a casting's gravitational center: the casting as a whole lives within or around them. You can sound the pitch and find the hermeneutics of all the keycenters in the Musician's Die Index. Feel your keycenter's resonance; sing along. You'll find detailed explorations of each keycenter on the pages under In Depth: The Musician's Die, in the menu above.

A third layer of metaphor available from the Musician’s Die regards whether it is pointing generally left or generally right. The further to the left it points, the more it looks to the past; the further to the right it points, the more it looks to the future; the more vertical it is, the more it observes the present. This “time reference” interfaces interestingly with ascent and descent: a Die pointing at 3 o’clock, for example, might indicate an intentional process with a sharp eye to the future; a Die pointing at 7 o’clock might look at what’s coming down around us, with a nod to the past.