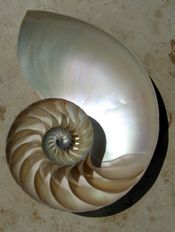 The design of the elements in the Muzoracle—its iconography and the cards and dice themselves—arise essentially from these: the geometric forms of the Vesica Piscis and its cousin in bloom, the Flower of Life; and the golden ratio, Fibonacci sequence,and platonic solids, which can be derived from or found within those forms. 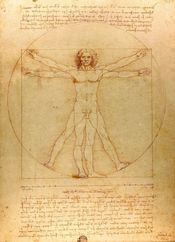 The history and significance of these forms and numbers is beyond the scope of this site; there is much material available that addresses them. Following are some notes specific to the Muzoracle’s design; their subject matter can be further explored on one’s own. 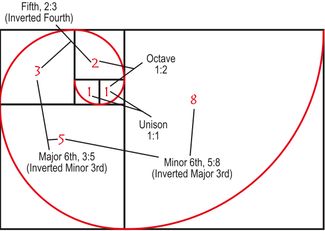 • The ratios between the first 6 numbers of the Fibonacci sequence are also found between the first six partials of the Harmonic Series: 1:1 is a Unison, 1:2 an Octave, 2:3 a Perfect Fifth, 3:5 a Major Sixth, and 5:8 a Minor Sixth. Inverting a Perfect Fifth creates a Perfect Fourth; inverting a Major Sixth creates a Minor Third; and inverting a Minor Sixth creates a Major Third. Thus, within the Golden Spiral, is a Major Triad expressed, and all of the intervals in the Series before the Harmonic Engine kicks in at partial seven. 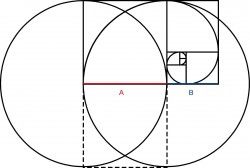 • The Vesica Piscis is formed by connecting two circles together at their midpoint. The Golden Spiral and Fibonacci sequence can be derived from its geometry.

• The Flower of Life is comprised of overlapping Vesica Pisces, of nineteen similarly intersecting circles.

Two-dimensional renderings of the platonic solids—the five regular, convex polyhedrons that can be constructed in three dimensional space—can be formed by connecting points within the Flower of Life.

• The five platonic solids, the discovery of which is (arguably) attributed to Pythagoras, were associated by Plato (and Kepler, as shown below) with the five elements: the tetrahedron to Fire, the icosahedron to Water, the octahedron to Air, the hexahedron (cube) to Earth, and the dodecahedron to Aether, or spirit. The Muzoracle associates each of the solids with an element and an instrument family/suit: Tetrahedron/Fire/Brass; Icosahedron/Water/Strings; Octahedron/Air/Woodwinds; Hexahedron/Earth/Percussion; and Dodecahedron/Aether/Voices. 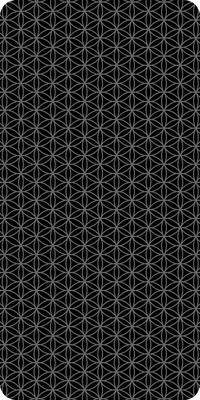 • The intersecting circles of the Vesica Piscis and Flower of Life expand into eternity on the back of the Muzoracle Cards. If you soften your gaze and look into them, they will take you places!

• The Fibonacci sequence winds its way through the system in other ways as well: 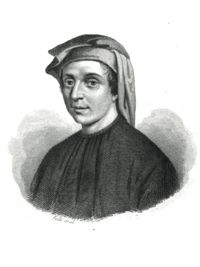 89 Cards in the entire deck

144 Faces on the Solfège Dice