Beginnings: What's in the box. 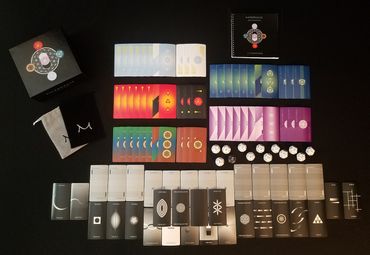 What's in the box. The Muzoracle deck consists of 89 cards. Among them there are essentially two types: the Suit Cards and the Compositionals. The 55 Suit Cards are divided among five suits, each of which is based on an instrument family; they are Brass, Strings, Woodwinds, Percussion, and Voices. The 34 black and white Compositional Cards are based on elements, concepts, and directives used by composers and/or found in musical compositions.

There are thirteen twelve-sided dice in the Muzoracle: 12 white dice marked with solfège (sol-FEZH—do, re, mi, etc.) and one black Musician’s Die, which is marked with musical pitches. The Solfège Dice refer to steps in a musical scale and indicate points in process, points in time. In a traditional Tarot spread, the cards are laid out in specific positions—“future,” “past,” “hopes and fears,” and so on. In a Muzoracle casting, it is the white Solfège Dice that define the positions: which dice faces come up determine which positions are revealed.

The black Musician’s Die determines both the keycenter and the “direction” of a casting. The keycenter is a necessary reference point when playing the casting on an instrument or listening to a casting’s positions online; it also references a chakra or movement between chakras, providing the casting with a connection to the body. A casting’s “direction,” determined by the direction the die is pointing when it lands, indicates whether the casting is based on an ascending or descending scale, which influences further how it is interpreted; it also determines whether the casting is generally referencing the future, past, or present.

In addition to the above, the Muzoracle comes with a printed Quick Reference that includes instructions for casting and interpreting, along with abbreviated indices of the cards and dice. Available as a free download is The Muzoracle Mythopoetics and User's Guide, a 200 page book detailing all the inner and outer workings of the Muzoracle system (in the footer below); much of the material on this site is drawn from it. Available separately is a hard cover version of the Mythopoetics, and a Reference Poster as well—please visit the shop for details.