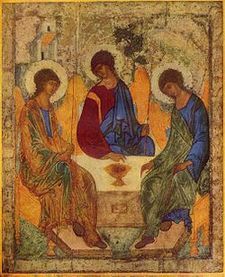 Three Forces. The Law of Three, as defined by G.I. Gurdjieff, states that there are three primary forces at work in our world, the affirming, denying, and reconciling; in the Muzoracle they are called the Initiating Force, the Receiving Force, and the Conciliating Force. The Initiating and Receiving forces are somewhat analogous to the Taoist concepts of yang and yin, respectively, to active/passive, positive/negative, masculine/feminine, and so on. Yang and yin, however, are sometimes used to describe states of being, while the three forces are just that: they are forces, they “act upon” or within. The Receiving Force refers to the “passive action” of that which is preexisting and receptive. It is alive in the darkness from which existence springs, and the nothingness into which “something-ness” enters. The Initiating Force is that which springs forth from the Receiving, and penetrates it as well: it is active, bright, rising, falling, and actuating change. The Receiving Force is a foil to the Initiating, a resistance; yet without the Receiving there would be nothing from which the Initiating could arise. Like yin and yang, the Receiving and Initiating forces are contained within one another, and are interdependent.

The third force, the Conciliating Force, is that which brings the first two together and allows phenomena to manifest. In electricity, for example, the first two forces flow as positive and negative currents—both of which are moot without the presence of the third force, alive in the conductor (not the conductor itself, but the force alive in it.) The third force can also express within a catalyst, as when flour and water become bread with fire; or within a conciliation, as when two sides of a case are resolved by a judge; or within a result, as when a teacher and pupil ensure transmission of a teaching.

While we can observe the effects of this third force and sometimes see what brings it about, the force itself is ultimately a mystery to us. Electricity is a classic example—we don’t really know what it is. We can measure the activity of fire on flour and water, but the true how and why of that activity is a mystery (and so, by extension, is bread.) We can see a judge resolving two sides of a case, but the actual activity of resolution—what is that?

Slippery as the Conciliating Force is to define, it is easy to see when it’s lacking: the first two forces play off one another endlessly, and nothing furthers. Lack of the third force can readily be seen, for example, in war: regardless of either or both parties’ intentions or roles, or alleged winners or losers, it's ultimately, inevitably, a game of pass the gun.

In Muzoracle mythopoetics, the Initiating Force is expressed in the ratio of 2:3, in the interval of the Perfect Fifth, which marks the first appearance of harmony in the Series that is not an octave. In the Harmony Cards, Perfect Fifths are equated with initiative and assertion. The Receiving Force is expressed in the space between the Perfect Fifth and the Octave just above it, in the interval of the Perfect Fourth at 3:4. Perfect Fourths in the Harmony Cards speak of yielding, inclusiveness, and essence. The Conciliating Force is expressed in the sonorous Major Third, which arises just above the Perfect Fourth at a ratio of 4:5; in a Major Triad, this is the interval that truly sweetens the pot. In the Harmony Cards, Major Thirds are equated with resolution and ease. (Note, however, that when mi sounds, the sixth and seventh partials await, are implied; mi-so-te forms a little triad of its own, a “diminished” one, framed in a tritone. Even resolution and ease are on their way elsewhere. Also notable is the fact that our initial do arose, via the Harmonic Engine, from the key a Perfect Fourth below itself—the Initiating Force does not only penetrate the Receiving, but is born of it as well.)