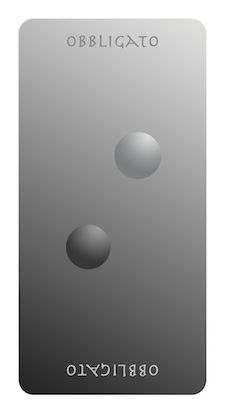 In the Baroque era, musical accompaniment was often improvised. The melody of a piece would, of course, be scored; its bass line would be, too, but would include Arabic numbers alongside the notes. These numbers would indicate a basis upon which a musician playing a chordal instrument, such as a harpsichord, could improvise an accompaniment.

In contrast to these improvised accompaniments was the obbligato (oh-blee-GAH-toh), a scored accompanying part that one was “obligated” to play exactly as written. In the years since, an obbligato has come to mean any prominent, but chiefly ornamental, accompaniment, usually in the form of a countermelody.

Obbligato is an Elemental card, and references something we are obliged to do, or are convinced we are obliged to do; it can point to an actual duty, a sense of duty, or a duty pressed upon us. It’s rather the antithesis of the Improvisation card, which has us making things up as we go; Obbligato is more about following directions and codes of conduct, self-imposed or otherwise.