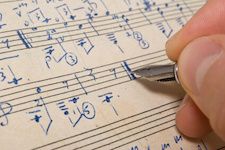 The 34 Compositional Cards in the Muzoracle deck are based on concepts, elements, and processes used by composers or in composition. While generally referred to as a single group, the Compositionals are actually divided into subcategories: Elementals and Directives, the latter of which are further divided into Instructives and Expressives.

The 21 Elementals are just that: elemental. They can refer to the basic building blocks of music, such as Melody and Rhythm; to tools and techniques employed by the composer, such as Editing and Listening; or to types of musical passages, such as an Obbligato or an Ossia.

The remaining 13 cards in the deck—the Directives— are unique in that they can be interpreted as actual instructions to the querent: go here, go there, speed up, quiet down. They might also reference ways in which we are being directed by others—or they might just describe what’s at hand.

Eight of the Directives are Instructives, light grey cards with musical staves on them. Instructives are based on instructions found in a musical score: things like Accelerando and Ritardando, which tell us how fast to go, or Crescendo and Diminuendo, which speak of force; or things like al Segno and al Coda, which function like musical GPS.

The remaining five Directives, the Expressives, speak of emotional tone. They are dark grey with musical staves, and have names like Agitato, which speaks of agitation or restlessness, or Con Amore, which speaks of love.

There are 42 musical terms spread across the 34 Compositionals (some of the cards contain a different term on each end.) All 42 are listed alphabetically under Compositionals A-O and Compositionals P-Z, in the Table of Contents at left.