Mechanics to Metaphor: Pitch, Chakras, and a World "Do" 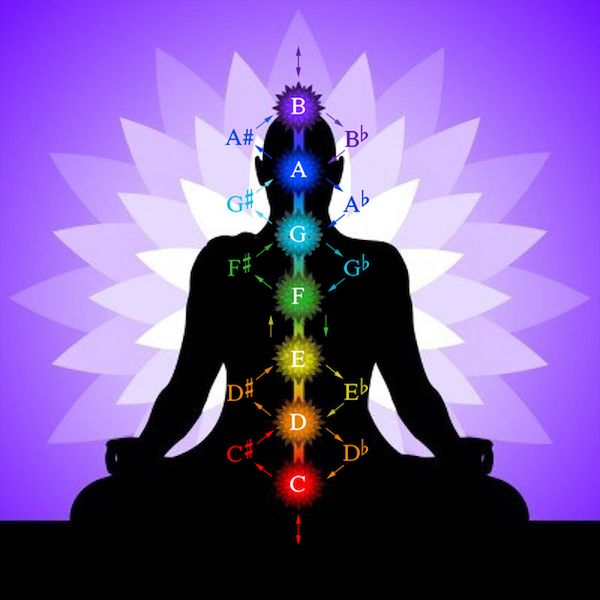 Pitch, Chakras, and a World "Do". Chakras are energy vortices in our subtle, or spirit, bodies that correspond with locations in our physical bodies. Our subtle bodies contain complex networks of channels called nadis that carry prana, or vital energy, much in the way our veins carry blood. Chakras are the places where these channels intersect. The chakras carry out functions necessary to our subtle bodies in the way that organs carry out functions necessary to our physical ones. They maintain their position relative to the physical body, but are in constant rotating motion, animated by the energy coursing through them.

The theory of subtle bodies and chakras comes from the Tantric Yoga traditions. The exact number of chakras varies from branch to branch, and varies further still in the many other practices that have adopted and adapted the theory. Most contemporary systems, including the Muzoracle, acknowledge and work with seven major chakras. They are the Crown Chakra , the activity of which can be sensed in the area just behind the top of the skull; the Third Eye Chakra , which can be felt between and just above the eyes; the Throat Chakra , felt just above the V of the collarbone at the lower neck; the Heart Chakra , behind the breastbone and in front of the shoulder blades; the Solar Plexus Chakra , two inches below the breastbone behind the stomach; the Sacral Chakra , two inches below the navel and rooted to the spine; and the Root Chakra , between the tail bone and the pubic bone.

Energetically, we are conduits between the Heavens and the Earth. Descending energy enters us through the Crown, increasing in density and slowing in vibration as it falls downward. Accordingly, each chakra spins slower than the one above it, converting the energy passing through it into a form appropriate to its function. Ascending energy rises from the Earth and moves upward from the Root, decreasing in density and increasing in vibration as it is transformed. These “Seven Steps to Heaven,” this Jacob’s Ladder, are analogous to the seven steps of the diatonic scale.

In Muzoracle mythopoetics, and in many other practices and traditions, the note “C” is aligned with the Root Chakra. Unique to the Muzoracle system is the exact frequency assigned to C—it is lower than in most tuning systems, as explained below. Also unique to the system is the use of the chromatic notes that fall between the seven diatonic ones: they reference energy moving up or down from one chakra to the next.

The keycenter of a casting defines its do, and thus its tonality; musically, everything in the casting references it, either by consonance with it or lack thereof. The chakra associated with a casting’s keycenter relates similarly: the entirety of the casting takes place within, around, or in relation to it. A casting’s keycenter can be thought of as its “where”: the casting takes place in or around its associated chakra, referencing the chakra’s properties and touching upon its metaphors.

Schumann Resonances were first documented by Nikola Tesla in 1899. A German physicist named Winfried Schumann studied them extensively and began trying to measure them in the 1950s, and got his name attached to them (although accurate measurements weren’t possible until the 60s—and Tesla’s numbers were right from the start.) The resonances arise from lightning storms—of which there are around 2000 occurring planet-wide at any given moment—exciting the cavity of air between the Earth’s surface and the ionosphere. Acoustically speaking, life on Earth arises and exists within a room whose boundaries are these. Due to the ongoingness of the storms, this torus-shaped expanse that encases us is forever singing, like a wine glass forever flicked by the finger of fate. The fundamental frequency of that song, the do of its tonality, is, on average with slight variations, 7.83 Hz: the fundamental Schumann Resonance.

To say that the fundamental Schumann Resonance has an influence is an understatement: all of life on Earth—including us and our thoughts and feelings—arises within it and its harmonics. That sounds like a world do if I’ve ever heard one—and that’s the frequency associated with C and the Root Chakra in the Muzoracle system. (While 7.83 Hz is far below the range of our hearing, we can hear—and certainly feel—the resonance two octaves higher, at 31.32 Hz; three octaves higher than that we find our middle C at 250.56 Hz.)

A spectrogram of the Schumann Resonances, recorded over a few months in 2017.