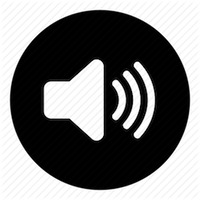 Amplitude. Once plucked, a guitar string moves to and fro through space. A chain reaction then begins from the molecules adjacent to the string: each knocked molecule knocks into another, forming a wave. The harder we pluck the string, the taller the wave is, and the louder we perceive it. The stone dropped in water analogy is helpful here: the heavier the stone, and/or the harder we throw it, the bigger the waves it makes. The same phenomenon is at work in other instruments, of course—the harder you blow a trumpet, the harder you whack a drum, the louder they get. Amplitude, then—loudness/softness/wave height—is a result of force.

In the Muzoracle, musical terms associated with amplitude are metaphors for force. The sforzando card, for example, refers to a sudden or shocking increase in force; crescendo and decrescendo refer to steady increases or decreases in force, respectively.